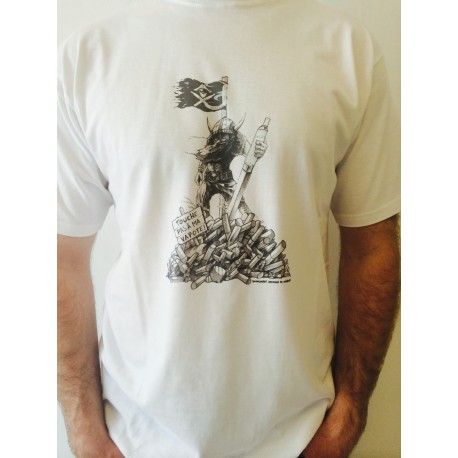 It was during his third voyage across the tarred ocean that Captain Long John Dreaper, who was searching for the nest of dragons that served as mounts for the officers of the Ashen Empire, recruited the legendary Viking dwarf. A poet who had just been released from the clutches of the Empire had just told him of the existence of Kantazaghâl Lungs of Mithril.

Although he had seen a number of things that people of reason obviously could not believe, Long John thought at first that he was being serenaded and almost had the unfortunate poet thrown overboard. However, since he was not a man to take other people's lives lightly, he decided to find out for himself and set sail in search of this children's tale. Nothing had prepared him for the spectacle that awaited him. So much so that, taken by surprise, he lost his headband, his beard, and his vaporous leg. Kantazaghâl was fighting alone against a score of dragons twirling and spitting their fire on the horns of his helmet.

As unwavering as he was taciturn, Kantazaghail greeted the captain with only a cold hello, but could not refuse to join the Pirates when Dreaper described in detail the injustices of his own world and the sinister role dragons played in it. From that moment on, Kantazaghâl became a symbol of the power of the Pirates, and then of the great Vapor Alliance, which he serves with incomparable loyalty to this day.