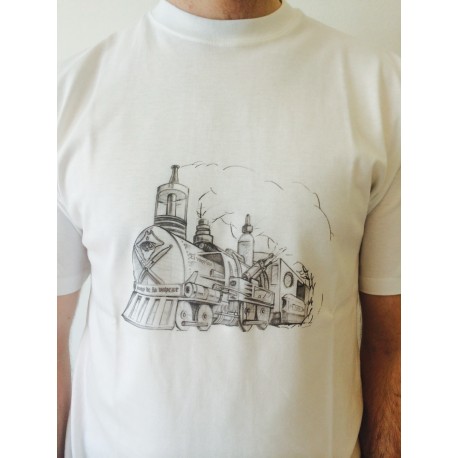 It all begins shortly after the insurrection led by Captain Long John Dreaper began, when the hunted rebels took refuge in the heights of New Glycea Island.

Long before the Steam Pirates became synonymous with cold sweat and sleepless nights for the Ash Generals.

At the bottom of a tunnel, they found the remains of an old locomotive half-buried under a pile of rocks and ice, so old that a colony of crystals was blooming on its rusty hull.

The engineer of the little party, the unpredictable Doctor Ide Eelyk, had to deploy all his genius, and more, to restore this ancient steam engine.

By one of those miracles of which he alone held the secret, he managed to resuscitate the batteries to make them wear-free, reinforced and braided the cables until they became harder than iron, while making a network of invisible pipes. To top it all off, he managed to feed the whole thing with an amazing alchemist's tank, the plans for which had been floating around in his deranged brain for at least a decade. Launched at full speed by a mysterious railroader rumored to be equal parts flesh and vapor, "El Vapo Loco" has since been wreaking havoc on the Ash Empire on dry land as Captain Long John Dreaper takes over the oceans one by one; camped, proud as a bear, on the deck of his intrepid three-masted steamer.